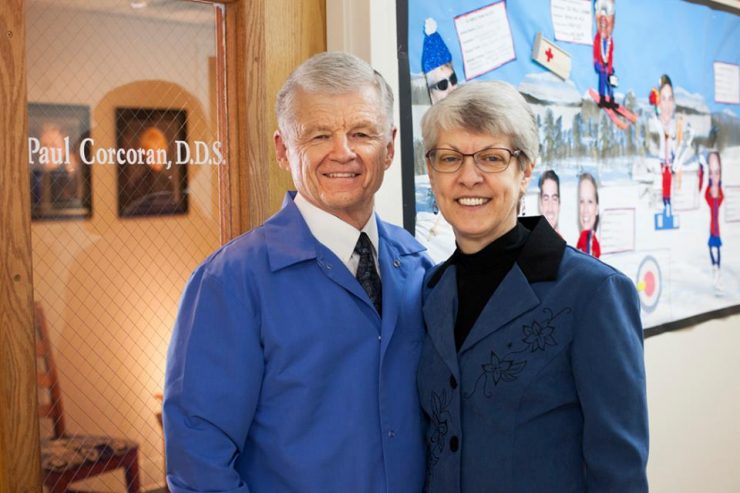 The University of Maryland School of Dentistry (UMSOD) has established its first three endowed professorships over the past five years, demonstrating a strong commitment to excellence in research and teaching.

This comes on the heels of a substantial 30 percent increase in research funding since the last fiscal year. UMSOD already ranked among the top 10 schools in National Institutes of Health funding according to the Blue Ridge Institute for Medical Research, and this increase further solidifies its position as a hub of dental research.

The inaugural endowed professorship, given in the field of oral and maxillofacial surgery, was announced in July 2020 and funded by the generosity of alumni Frederick G. Smith, DDS ’78, MS, and Venice K. Paterakis, DDS ’81.

Awarded to Tao L. Lowe, PhD, previously of the University of Tennessee Health Science Center, the professorship provides a joint appointment in the Fischell Department of Bioengineering at the University of Maryland, College Park. Created to attract an outstanding translational research scientist in the field of drug delivery and tissue engineering who has a history of working on multidisciplinary teams and a strong commitment to graduate and undergraduate education, the role will allow Lowe to lead translational research in addition to providing leadership in education, outreach, and service.

Further emphasizing the school’s strong alumni support, the Alumni and Friends Professorship in Orthodontics was announced in September 2020. Awarded to Jose A. Bosio, BDS, MS, clinical associate professor, division chief, and postgraduate program director, Division of Orthodontics, the fund was established under the stewardship of Edgar Sweren, DDS ’54, together with other dedicated alumni donors and friends, to support an outstanding educator with national leadership and distinction in orthodontics.

In October 2020, Robert K. Ernst, PhD, was announced as the inaugural Dr. Paul and Mrs. Jean Corcoran Endowed Professor. Created to recognize and support a well-established research team that will provide a positive economic impact on Maryland commerce, the endowment was funded through the generosity of Paul Corcoran, DDS ’75, and Jean Corcoran in partnership with the Maryland E-Novation Initiative Fund. Ernst, professor and vice chair, Department of Microbial Pathogenesis, has received more than $14 million in research funding since arriving at UMSOD in 2018 and is co-founder of the startup Pataigin LLC.

“Endowed professorships empower the school to recruit and retain outstanding faculty members as well as support in perpetuity their work as educators, scholars, researchers, and clinicians,” said Mark A. Reynolds, DDS ’86, PhD, MA, dean of UMSOD. “The philanthropic establishment of endowments by alumni and friends helps foster enduring academic excellence.”

Formal investiture ceremonies for all three professorships will be held later in 2021.

Joel Kabot is an editor at the University of Maryland School of Dentistry.

The Power of Partnership: Collaboration, Innovation, and Impact

Building a Legacy of Community Engagement